On the strategic costs of civilian casualties

I am currently working on a series of articles, popular and academic, on the US bombing of Cambodia. We have been using some remarkable new data that quite dramatically alters the history of this period – particularly regarding the versions outlined by Kissinger, Nixon and Shawcross, and the link between the bombing and the rise of the Khmer Rouge insurgency movement. Part of the project has involved going through many of the Nixon tapes. Here is a clip from one of our articles, describing a revealing conversations between Kissinger and Nixon and then Kissinger and Alexander Haig:

Telling Kissinger on December 9 of his frustration that the US Air Force was being “unimaginative,” Nixon demanded more bombing, deeper into the country: “They have got to go in there and I mean really go in . . . I want everything that can fly to go in there and crack the hell out of them. There is no limitation on mileage and there is no limitation on budget. Is that clear?”

Kissinger, aware of the military assessments concluding that the air strikes were like “poking a beehive with a stick,” responded hesitantly: “The problem is Mr President, the Air Force is designed to fight an air battle against the Soviet Union. They are not designed for this war . . . in fact, they are not designed for any war we are likely to have to fight.”

Five minutes after his phone conversation with Nixon, Kissinger called General Alexander Haig to relay the new orders. “He [Nixon] wants a massive bombing campaign in Cambodia. He doesn’t want to hear anything. It’s an order, it’s to be done. Anything that flies on anything that moves. You got that?” The response from Haig is barely audible, but it sounds like laughing.

Today a continued use of airpower in combating insurgencies raises this same dilemma: perhaps even more than civilian casualties of ground operations, “collateral damage” from U.S. aerial bombing still appears to enrage and radicalise enough of the survivors for insurgencies to find the recruits and supporters they require. If ‘shock and awe’ worked against the regular Iraqi army, does it also nourish the anti-US insurgency? Whatever the moral meaning of inflicting predictable civilian casualties, do the political repercussions of air strikes against an insurgency outweigh their military benefits?

While the munitions are radically different, Kissinger may still be right about the use of airpower against a heterogeneous insurgency. Further, I think the question of the strategic costs of civilian casualties in this context is under studied. Much of the debate is, I believe, wrongly centred on the morality of the deaths and whether they are ‘justified’ in international law. This is an important question, undoubtedly, but one that is devoid of the potential strategic costs of the casualties. I would argue that a very small number of civilian casualties, regardless of the ‘justice’ of the attack or the efforts to limit collateral damgage, can have a grossly disproportionate strategic cost when fighting an insurgency. Those whose family’s are killed will rarely be convinced by our rationalizations, nuances, claims of moral difference etc. More likely they will become, at the least, tacit supporters of the insurgency being fought. When fighting a group that requires this very civilian support, this becomes a serious strategic concern.

I would be interested in readers’ opinions, or recommendations for reading, on the strategic costs of civilian deaths. Again, putting aside the morality or justice of the strikes themselves, are we underestimating the damage done by civilian casualties in asymmetric warfare?

FYI – this is a map (of hundreds we have made) of the bombing of Cambodia. Each point represents one target and usually many sorties (of which there were over 200,000). When the first article is published, (soon), I will discuss the findings of the spatio-historical analysis. 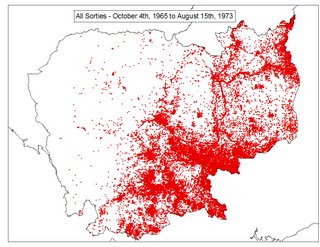 One response to “On the strategic costs of civilian casualties”